Model United Nations (MUN) aims to encourage young people to involve themselves in the issues and problems confronting the world today. 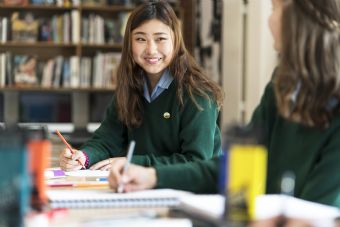 Rathdown School has been involved in Model United Nations for over 20 years. Each year, our students attend several MUN conferences.

MUN aims to build an understanding of current global challenges amongst the next generation of world leaders and thinkers while developing the skills that young people require to work and live in a globalised world.

The experience allows the students to build confidence in public speaking as well as a lasting interest in international affairs and a deep understanding of how the UN works.
In recent years, Rathdown students set up their own Model United Nations club so that experienced delegates could give training and instruction to new delegates, as well as an opportunity to practise their debating and public speaking skills in advance of attending conferences.

Students take on the role of diplomats and political leaders, and debate global issues by participating in simulations of international diplomatic forums such as the United Nations Security Council and General Assembly.

Participants develop and promote their own solutions to pressing world problems, negotiating for support for their ideas with other young people from across the world.

MUN offers a unique opportunity for the students to improve the skills they acquire in the classroom alongside those they have developed in other co-curricular activities including:

In addition to attendance at conferences, we host our own annual MUN conference – RADMUN, with over 200 delegates attending from secondary schools around Dublin.

RADMUN is a two-day event run entirely by students, under the guidance of Rathdown's MUN Director.

The students come together to represent different countries in a role-playing activity that simulates the real work of the United Nations.

Historically, Rathdown was the first all-girls secondary school to host a MUN Conference and the event continues to grow each year.